Sometimes the best solutions to our most pressing problems are hiding in plain sight. 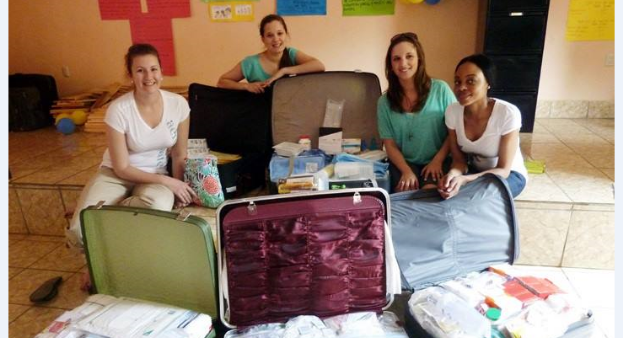 Many people around the world today need medical supplies – yet, every day, U.S. hospitals throw them away. This practice not only prevents us from helping others, but it generates a huge amount of waste. Now, with the help of our clients and Not Just Tourists (NJT), a terrific not-for-profit organization, we are beginning to save these supplies and help people fight illness, infection, and disease by sending supplies to underfunded clinics in third-world countries.

I’ve been with Crothall for about a year and a half in a large rehabilitation hospital in Los Angeles. I began working with NJT and collecting high-quality medical supplies while working at the University of California at Irvine Medical Center. To say the least, I was very impressed with the initiative and wanted to expand the program at my facility.

Based in Canada, NJT allows people traveling around the world to deliver medical supplies to those in need. The NJT movement began in St. Catharines, Ontario, in 1990, when doctor Ken Taylor and his wife Denise started personally delivering medical supplies to remote areas of Cuba. The couple was soon approached by others who wanted to get involved and began contacting local hospitals, pharmacies, and drug companies for contributions.

For hospitals, there are three key advantages: it helps them save lives, reduces their carbon footprint and saves money on disposing of unused medical supplies. According to NJT Toronto, citizens transported approximately 143,000 pounds of medical supplies last year while saving precious space in landfills.

The obvious question, is, why are these supplies thrown out?  In the name of safety, medical personnel at hospitals across the nation toss out supplies that are part of a packaged kit. For example, a nurse treating a patient after surgery often opens a wound care kit, uses one or two items, and discards the rest of the supplies as standard practice instructs.

But the impact of collecting supplies even at one hospital can be enormous. Once we received approval and were up and running at UC-Irvine, we quickly accumulated 20-30 buckets of perfectly good medical supplies that otherwise would have been thrown out. Until its right in front of you, it’s hard to believe all of these supplies would have been wasted.

Making a Difference at Crothall

To my knowledge, the NJT program at UC-Irvine was the only one in the nation.  So, when transferred to my current hospital in early 2018, I wanted to bring the program with me. I needed to set up the infrastructure, so I worked closely with hospital administrators. Once I had their approval to set up the program I worked with physicians and the other department heads to implement the plan for collecting supplies. I then contacted the NJT branch in Orange County to set up a drop-off point for our supplies.

The program at by current hospital began in September 2018 and has already made a significant difference. We have collected more than 300 pounds of medical supplies by simply placing buckets labeled NJT supplies in utility rooms around the hospital.

The most common items tossed into the buckets are gauze, bandages and scissors, all unopened and not used.  We don’t collect any medicine or liquids because it is illegal to transport them on airplanes outside of the US. Once the buckets are full, I take them to the NJT branch, where they place the supplies in suitcases that are ready to be transported. 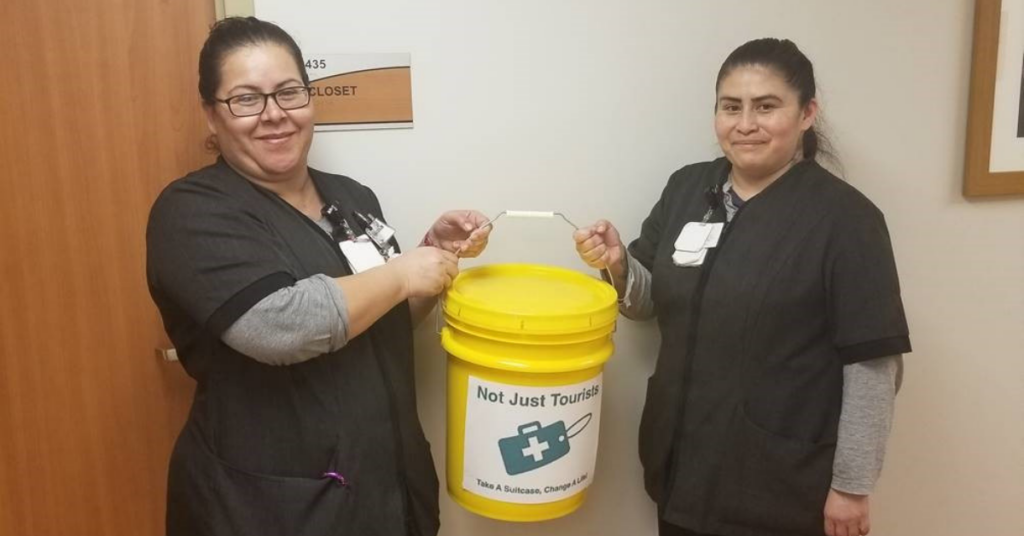 After setting up the program here, with the help of my Regional Director – Eddie Paez, I decided to promote the program’s sustainability benefits to other Environmental Services (EVS) directors in my region in Southern California. As a result, Zach Perkins, an EVS director in Santa Monica, Calif., and Jerome Ong, another EVS director at in Whittier, Calif., have successfully lobbied to start programs at their facilities.

Both are acute care hospitals that will likely generate significantly more supplies than my facility. Because both hospitals generate a large amount of waste, saving their unused supplies is another step in helping others and making our environment safer.

I haven’t yet had the thrill of traveling and delivering medical supplies to people in need. But in November, I’ll be traveling to Italy and plan to personally deliver some supplies to a clinic in need. There are four clinics near Italy – in Tunisia, Tripoli, Greece, and Croatia – that need supplies.

My hope is that we are just getting started. It still blows my mind that UC-Irvine and now, our three hospitals, are the only hospitals in the nation involved in this program.

For me, it’s a no-brainer. If you can save your facility money, help save the environment, and help people in need all over the world at no personal cost, I think that we as human beings have an obligation to step up and change the way we look at our sustainability practices. I really hope that we can spread the word about NJT and tell our story to more people, inspiring others to get involved.

By Eddy Evans, Director of EVS

For those that want to find out more about NJT and how to set up a program at your hospital, contact me at Eddy.Evans@Crothall.com.