It was a team that was capable, but the atmosphere was more chaotic than it needed to be. It wasn’t suitable for a patient transport team. 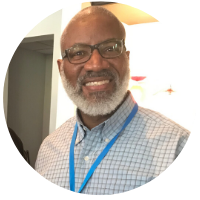 Or, you can choose to ignore all that and make your new chapter yet another success story.

Let our 2019 Crothall GEM (Great Employees Make Magic) of the Year, James Brown, be your inspiration. His commitment to excellence, keen understanding of the human condition, and willingness to share a lifetime of management experience earned our top honor, as well as spurring his Patient Transport Team to Crothall’s Account of the Year.

“In 2014, in a previous incarnation of GEM, James won the Patient Transport GEM of the Year,” remembers Karl Monroe, a communications and recognition manager with Compass One Healthcare. “We spent two days doing focus groups. He was the ringleader. He was so well spoken, with such a big heart about what he does. He brought us to actual tears, because he’s such a great speaker.”

“James has demonstrated exceptional leadership skills,” said his nominating manager, Sean Flynn. “James took the initiative to perform CPR on a patient. He was able to save the patient’s life.”

“If I had 25 James Browns, I would be out of a job,” agrees the current Director of Patient Transport, Austin Whitcomb. “He’s like a second manager. I’ve only been in this position two months, and he was really helpful in my transition. He has the answer to all my questions, someone I could lean on. Having him step up and help out was crucial.”

“He’s a leader, he takes initiative when he sees problems in the department,” continues Austin. “I’ve heard stories about how a transporter didn’t tuck in his shirt, and it looked unprofessional. James took it upon himself to have that conversation. Not just with the transporter, but the whole staff. He holds himself accountable. He sets a great example that people can follow.”

Not everyone is willing to mentor other associates, but Mr. James doesn’t mind. “I’m 61. I don’t need to be like the group, like the crowd,” he explains. “I wanted to be different. Leadership can be lonely, but I’m ok with that.”

It was Crothall’s honor to recognize James for his willingness to be different, raising the bar for Patient Transport and Crothall as a whole.

“Mr. James was surprised, taken aback,” says Austin, remembering the announcement. “He opened his box and letter, and read it out loud. Since we also won account of the year, we all read it together. He was speechless. He’s a humble guy and doesn’t expect to be rewarded, so I think he was happy to share the experience with his coworkers.”

We are pleased to share James Brown’s experiences with the rest of you.

How long have you been at Crothall?

Almost seven years. I have six children (three young men and three young ladies), and the last two wanted to attend college, Courtney at George Mason University, Javier at North Carolina A&T. I told my wife that I could get a job, so we’d have extra money to help pay for college.

We’re not far from Northwest Hospital in Randallstown, MD, so I said, “why don’t I go over there and see if anything is available that fits my schedule.” The manager offered me a part-time position and asked if I could start immediately.

Within a week, he asked me to work full time to help change the face of patient transportation.

He said, “I’m the man to do that kind of thing. I have a background in problem solving and leadership. I knew I could take it from thought to practice. But I did not want to find myself back in management.”

Why didn’t you want to go into management?

I’ve been doing that for years, working for home management companies. I’m 61. I’ve raised six children. I’ve managed apartment complexes with 1,000 units, but I still wanted to be a high-caliber asset in the field. I accepted with the thought that I would help mold and mentor this program.

Your unit also won Account of the Year, in part because of you. How did you “mold and mentor” your team?

I walked into the office with a number of transporters who were very young. In my estimation, they were looking for guidance, leadership. Not in the sense that they would ask for it, but with their behavior. I’m good at putting a team together, understanding the strengths and weaknesses of different individuals, and putting them in the right places so we can learn to win.

It was a team that was capable, but the atmosphere was more chaotic than it needed to be. It wasn’t suitable for a patient transport team.

How did you reduce the chaos?

First, look at volume, loudness. Recognize where the noise is, or where noise is lacking—who is making it. That allows you to start moving people, to increase the calm, the control and the direction. You can separate people. Team members who appreciate the change start to follow you, support you.

It’s like a flock of birds. If one turns, they all turn. It looks like one mass. That’s how teams work—the sum of the parts. I try to find out who has influence on that larger group. As soon as I get a handle on that, the noise quiets, the softness becomes more attentive, heads and eyes turn toward a leader. I prefer that leader to be me.

Then I can implement a system. Teach this practice, this training, this better way. Once you understand policies and procedures, it’s a repetition thing. You become efficient and then you become proficient; it becomes like breathing. People see that. Especially the patients. You can walk into a room and make a positive difference with smooth motions and very few words. It comes across in your whole being, how you carry yourself. It’s comfortable.

Can you talk a little bit about your system, SIC?

You need a training process where you can hand that confidence and effectiveness to someone else. I needed to come up with a system by which I could train and evaluate quickly. I called it SIC: Safety, Identification, Completion. With several subheadings under each letter.

I wanted Safety first. When new people interview with patient transport, they make it clear how much they want the job. These youngsters would get the job, but within two weeks, I would hear adverse conversations. “I don’t understand why management does this, who do they think they are?” Suddenly, management is the enemy.

I decided to listen and to find out why.

I realized that we need to make it clear why safety comes first, why we have these different protocols. Management, Crothall, and whoever is in charge, they have processes to show that they care about the patients and the team members. They want you to know that you matter. Management isn’t against you. The safety measures are in place to keep you healthy and strong.

We also want to move our patients safely. They come here because they are in need, and the last thing we want to do is add to their needs. That’s why we have safety measures.

Identification is number two. We don’t move a patient until we have properly identified him or her. We have six or seven ways, and we need to confirm their identity at least two of those ways. One of those ways has to be an ID bracelet. If there is no bracelet, you can’t move that patient. If there is, you need one other way to identify them. Then you need a doctor or nurse to approve it.

Finally, we focus on Completion. We need to complete our task within an industry-proscribed period. For example, we are going to get that task done within 14 minutes. We want the individual, the team, to know they have the support they need to complete each task in the appropriate amount of time.

If a new hire is assigned to Mr. James, if they spend 25 minutes with me, they will know and understand SIC and what it means. We all work to create such an atmosphere of success, of learning something and gaining something in that short period of time, that it inspires them to work for their own success.

How did you feel when you were named our Crothall Healthcare GEM of the Year?

Quite honored. A little surprised. I don’t like surprises that much. I’m a guy that likes a little more control. But I felt gratified, honored, and validated.

I’m proud of who I am. What makes me most proud is that I am a husband, a father, a big brother, a good friend. I am who I am because of my background and my testimony. I’ve had tragedies in life, including being made homeless because of fire, the murder of my firstborn son, my mother dying in my arms, the death of my second wife. She died after being brought here to room 26, where I now do 90% of my work, around that room. There are a lot of things that help guide me.

How was your Compass Night of the Stars experience as a whole? Was it what you expected?

It was above expectations. I thought it was going to be what it was, however, the full experience, to actually have it, was different. It was fantastic. There were so many people from different places, different backgrounds, but all with similar goals and expectations. I think the team and the people involved in putting on that production, that presentation, were amazing.

I hope I’m blessed to do something greater, so I’m invited back.