Here Are 5 Frontline Workers Who Built Careers At Crothall Healthcare

Crothall provides opportunities and resources for associates who want to grow in their careers. Here are five examples. 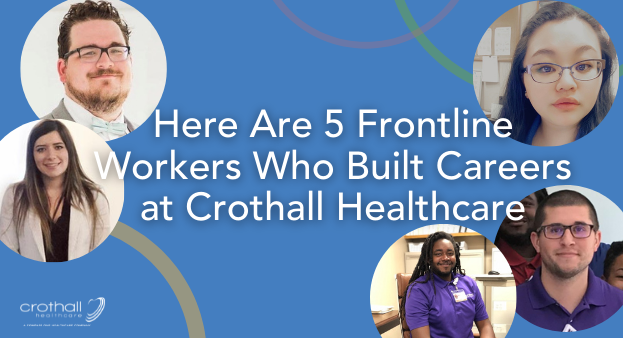 Attending college and needing a job, Nick Peattie began working the 4-8 p.m. shift as a patient transporter at a hospital. After working there for three years and earning his degree, he saw the potential for a career.

“After seeing the company up close in those early years, I realized the potential for a future with plenty of possibilities,” he says. Nick is just one example of how frontline Crothall workers can turn their initial position into a career. Here are five stories of Crothall managers who have turned a patient transporter position into a career brimming with hope.

After receiving my degree in kinesiology and exercise science, I decided to take a position as a patient flow manager at Novant Health Forsyth Medical Center in Winston-Salem, N.C. There was certainly some risk in this decision. It was an entry-level position, but I understood the company offered plenty of opportunities to grow and advance.

And that chance came quickly. During the next five years, I was promoted three times, and each time taking on more responsibilities. I’ve been a Director of Patient Transportation at Sisters of Charity Providence, a small hospital in Columbia, S.C.; the Medical Center at the University of South Carolina in Charleston and Novant Forsyth.  I’ve been here five years.

It’s not difficult to find people who want to be transporters, but most want to know they have a path to a career. Once they become a full-time associate, our managers can develop and train them. I let them know there is always an opening somewhere in the company, so it’s up to them how far they want to go.

I started as a transporter in 2017 during my junior year at the University of North Carolina at Charlotte. All of my classes were in the morning, so I worked from 2:30 – 11 p.m. every day. I enjoyed the work and during my last semester, I became a Team Lead which helped me to become a stronger communicator and leader.

After receiving my bachelor’s degree, I knew I wanted to move up within the company. But success didn’t happen immediately. One job went to someone else and a second position was eliminated due to the pandemic. But I remained hopeful, largely because my managers and a director encouraged me and helped in any way that they could. In June 2020, it happened – I took my current management position in Winston-Salem.

As a transporter, I enjoyed working with patients. I’ve always had a passion for creating safe spaces for people and making them feel comfortable. Helping new transporters understand that small acts make a huge difference for many patients, such as giving them a warm blanket or simply talking to them while we are moving from one place to another.

It’s important for all of us to realize that transport is the last interaction that patients have with the hospital. Being the happy ending to a patient’s hospital experience not only reflections our goals, but also reassures the patient that they can trust and feel safe in this hospital.

I’m still developing my skills as a manager, but Crothall has many opportunities available if a person is open to moving, much like I did from Charlotte to Winston-Salem. I’ll celebrate my one-year anniversary as a manager in July, and I see a bright future. My goal is to excel and be considered down the line for a director’s position.

Frontline associates can make it at Crothall by using critical thinking skills to solve any challenge that comes your way. Those who like to help patients and show it are always encouraged to grow their careers here. And I’m happy to help other succeed, much like my manages are doing for me.

During this period, the company provided me with plenty of training to succeed. I participated in the FRONTLINElevate course for new managers. I’ve also participated in leadership training programs, as well as those that help us engage and retain associates.

When I realized how many opportunities existed, it made sense to build a future here. In addition, working in healthcare gives me the chance to make a difference in people’s lives. My passion has always been to help people and this company has helped me achieve that goal.

Managing people has also been rewarding. I let them know my history and how I understand the challenges they are experiencing. And I let them know they can advance, even during times when they may be discouraged. I was turned down multiple times for positions and looking back, I know I wasn’t ready for them then. If I had gotten that promotion it would have been too soon and I would have been overwhelmed. It all came at the right time for me.

I’ve had the opportunity to grow quickly, becoming a manager only four years after my high school graduation. I joined the company in 2015 as a patient transporter at that time and was promoted to a manager role only two years later.

After leaving Crothall to join another company where I gained supervisory experience, I returned here in late 2017 for my second stint as a transporter, deciding that Crothall offered more long-term growth opportunities than my other employer. I was promoted to the Team Lead position in August 2018 and became a manager in May 2019.

Training courses have been important to my success. I participated in the Accelerated Management Program (AMP). It was a comprehensive course that provided me with knowledge about managing people, including how to communicate to achieve the best outcomes for them and our patients. It also helped me understand that our best transporters are people with compassion for our patients. Once I see this quality in a transporter, I know they could easily have a future career with us.

I believe everyone can make a difference and I’ve always been passionate about helping others see their potential. I am thankful for Crothall Healthcare because of similar reasons – they see the potential in their associates, and I want to be a part of that.

I’ve been working at Crothall for nearly nine years, but my path here is an unusual one. Back in 2012, I was majoring in computer science. However, I decided I wanted a job — and a career — that was more “hands-on” and gave me an active role in healthcare. Patient transportation met those needs. I wanted to help people and get them through what is often a difficult period.

I’ve taken advantage of opportunities to gain more knowledge about the company and succeed as a manager, taking several management training and public speaking courses. Crothall has given me multiple chances to move up within the company, working as a team lead and senior team lead.

My journey has also given me a new perspective on life. I used to complain about spending time with family, but now I realize I should cherish that time because they won’t be here. Forever. I’ve also focused on my own health, changing some eating habits for a healthier lifestyle, I’m a pescatarian which gives me more energy and I’m loving every minute of it.

One of my jobs is to train and manage new frontline associates. I enjoy showing them the benefits of working in a hospital environment. They will learn to think and react quickly to resolve many situations and also witness the care many people provide behind the scenes. If they decide they want to work in healthcare, this job provides them the opportunities for one-on-one interactions with a wide variety of patients. 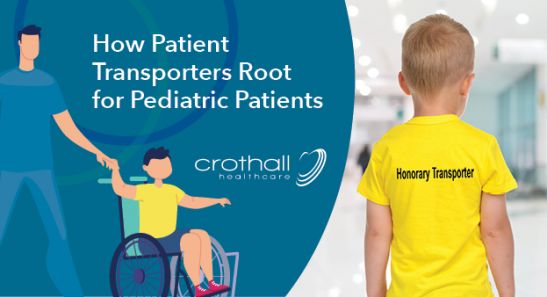