In 2017, Tiago Maltez began working part-time as a patient transporter for RWJ Barnabas Health, New Jersey’s largest integrated healthcare system. After several years working in the retail industry, he wanted a fresh start in a position where he could help people in need. Not long after joining Crothall, he knew he wanted to grow his career there.

In 2017, Tiago Maltez began working part-time as a patient transporter for RWJ Barnabas Health, New Jersey’s largest integrated healthcare system. After several years working in the retail industry, he wanted a fresh start in a position where he could help people in need. Not long after joining Crothall, he knew he wanted to grow his career there.

Five years and several promotions later, Tiago has fulfilled that wish. About a year ago, he became Director of Patient Transport at Mount Sinai West Hospital in New York City where he supervises 40 associates at a hospital that sees more than 65,000 patients annually.

It didn’t take long for him to know Crothall was meant for him. Following a promotion to patient flow coordinator at RWJ Barnabas where he worked for three years, he became the patient flow manager at Mount Sinai Hospital in March 2020.

“When I worked as a dispatcher, the team at Crothall was the most welcoming, encouraging group of people I’ve ever met,” he recalls. “I could ask any questions, make any mistakes, and people were there to help. My director used to be a dispatcher as well so I could see the growth. Higher ups always treated me like a person.”

In turn, Tiago brings a commitment to the job that is unmatched. When the COVID-19 pandemic shook New York City in March 2020, he continued coming to work each day despite the possible risks to his own health.

“When I started working here, I commuted from New Jersey every day.  When I got off the train at Penn Station, I walked past all of the shuttered businesses, but I carried on to take care of our patients.  If it was my Mom or Dad in the hospital, I would want someone there to take care of them.”

During the past few years, Tiago has earned the utmost respect and admiration from his supervisors.

“Under normal circumstances, starting in a management position at Mount Sinai Hospital is an arduous undertaking,” says Christopher Palamara, Resident Regional Director of Operations. “But during the early days of COVID in New York City, just when Tiago started, that intensity was amplified.  No matter what was needed, he rose to the occasion.”

In addition to his work ethic, Tiago has used his analytical skills to make significant improvements to Mount Sinai’s patient transport system. Founded in 1871 and located on 10th Avenue in Manhattan, Mount Sinai West has a unique layout that can be difficult to navigate and cause long delays in moving patients. 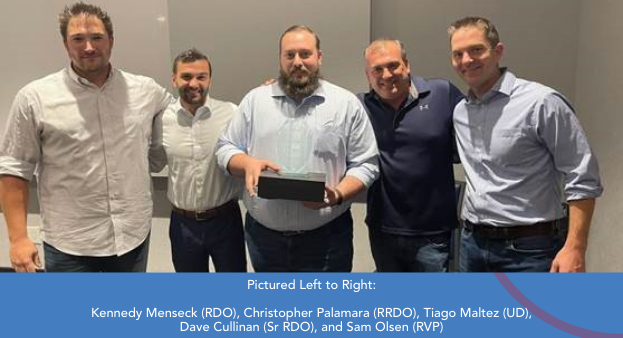 Working closely with the hospital’s Information Technology department, Tiago developed an algorithm that makes decisions based on a patient’s location to send transporters to the nearest patient who needed to be moved. This initiative quickly reduced waste and made the team significantly more efficient.

Since implementing the algorithm in February, there has been a 70 percent reduction in patients that wait 45 minutes or longer to be moved. Due to its success, the algorithm is now used by the patient transport teams at all of the Mount Sinai Health System hospitals.

As a result of his performance, Michelle Jablons, the hospital’s Vice President of Ancillary and Support Services, nominated Tiago and his team for the Healthcare Association of New York State (HANYS) Pinnacle Award for Quality and Safety – the only department in the Mount Sinai Health System to be nominated.

Tiago’s rise hasn’t surprised Palamara and Crothall Senior Regional Director of Operations, Dave Cullinan. They believed Tiago was ready to take on a director’s responsibilities after watching him perform consistently above his manager title for many months.

“He displayed a high level of technical competency, a desire to learn more, and admirable leadership skills,” Cullinan said. “So, when the director position opened up at Mount Sinai West, he was ready.”

“Tiago displayed a number of traits that indicated to us that he was ready for a higher-level management position. The most prominent of those traits were his strong work ethic and desire to learn. On a number of occasions, he proved himself to be the hardest working person in the room,” said Palamara.

Tiago pays particular attention to his clients’ needs, then works to fulfill each one. In December 2020, Tiago met with Michelle Jablons to understand her top priorities. She emphasized the need for safety, associate productivity, and proper allocation of Crothall’s resources, and he has responded.

“By listening and working with the frontline team members, end users, and clinical staff, we have been able to reduce our turnaround times, improve patient safety, and develop stronger relationships with our end users without the allocation of additional resources,” he says.

Tiago gives much of the credit to his team. “I’m lucky to be surrounded by great leaders who guide me in the right direction, while also giving me the freedom to make mistakes. I have a great frontline staff that provide me with unique perspectives and insight that I would not otherwise have. With all these outstanding people around me and the mindset of treating each patient like our own loved ones, making the right choices truly becomes a simplified process.”

Tiago also credits his success to the right training programs. He is now enrolled in the Foundations program and has learned the importance of becoming a leader who is fair and consistent with all associates in his unit. His goal is to treat everyone fairly and, if they make a mistake, give them a chance to improve.

“While it’s easy to want to make exceptions for employees that are perceived as harder working, my training has educated me on the importance of fair and consistent decisions for everyone on my team,” he says. “It not only helps me grow as a leader, but also fosters the relationships with my team that allow us to trust one another and work collaboratively to provide the best level of care for our patients.”