Ender Waltman is retiring after a successful 19 -year career with Crothall Healthcare at Infirmary Health System in Alabama. As a Resident Regional Director of Operations in EVS, Ender’s career was nothing short of extraordinary, and it all began when Crothall chose to hire him, an in-house director, from the hospital when they began their contract. 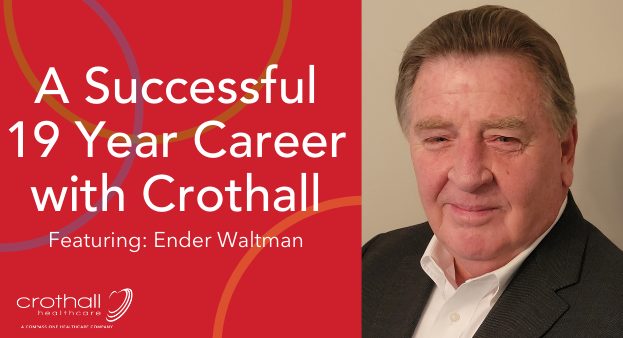 Prior to joining Crothall, Ender worked in the hospitality industry as an Executive Housekeeper and Hotel Assistant Manager with Hyatt Hotels, Inc. at properties in Los Angeles, CA; Houston, TX; and New Orleans, LA. After several years in the hospitality arena, he decided to return home to Mobile and joined Mobile Infirmary as the Assistant Director, Environmental Services, and was promoted to Director in 1984, a position he held until joining Crothall in the early 2000s.

That was when Mobile Infirmary began looking for an environmental services provider for the Hospital. Many of the competitors were determined to bring in their own Directors; however, the Client wanted to retain Ender in his role and was hoping one of these companies would bring him on board.

Crothall was offered the contract, and they were happy to offer Ender the position of Director, getting him involved in the start-up at his own account. Today, he has oversight of three (3) Infirmary Health System hospitals: Mobile Infirmary Medical Center, Thomas Hospital, and North Baldwin Infirmary. In addition, Ender also provides oversight to the Oakwood Nursing Facility. When telling the story, Ender recalled, “I was told that most in-house guys never made it past the first two to three months….19 years later, I’m still here!”

During his career with Crothall Healthcare and Infirmary Health System, Ender achieved many milestones. Ender and his team introduced the “Clean Team” concept that helped increase his accounts’ HCAHPS scores from the 50s to the upper 70s and 80s. He also managed to sign two ten-year extensions during his time. He has been the recipient of Crothall’s President Council Award on three (3) occasions and was a Founding Member for the American Society for Healthcare Environmental Services of the American Hospital Association.

According to Ender, Environmental Services is a rewarding line of work with great opportunities to grow. “It’s more than just pushing mops and brooms,” he said, “It’s a career. People do not realize that.” Ender encourages others to take the time to understand the opportunities ahead of them. Having the ability to hear the customers, staff, and clients’ needs will be a necessary skill to do the job.  “Be a teacher rather than a boss. Helping employees to understand the ‘whys’ of what we do rather than telling them what they need to do will only better the outcome,” Ender explained. “As you diligently work at learning everything you can about what it is we do, you will progress.” Many current leaders have come up through the ranks by proving to themselves that they can.

Crothall Healthcare is a great place to start your career. There are opportunities to grow within the company and advance your career, as well as diversity among the seven divisions that are offered. “I loved working for this company. I had the good fortune of being surrounded by great team members, both at the account level and Crothall senior and regional leadership, as well as client leadership.”

After retirement, Ender plans to do all the things he loves. So far on his radar are boating, fishing, golf, traveling, and spending more time with his grandkids. A special thanks to Ender, for his 19 years with us. We wish you all the best in your next chapter!